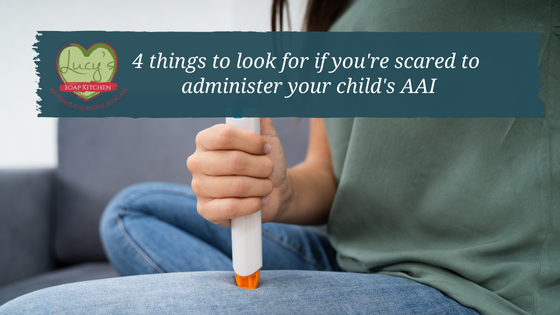 This week I administered an adrenaline pen into my my eldest daughters right thigh. I believed her to be having a biphasic reaction or protracted anaphylaxsis reaction.

It was the first time I've done it.

She was conscious and I explained to her that I was going to do it.

We were both scared.

Why? Well mostly because I was too scared.

This is not uncommon. Our dietician, based with Mullingar Hospital, told me that most people who die of anaphylaxsis are carrying a pen but either they or the people around them are too afraid to use it. To help break down our fear of using it she used a 'trainer' pen (a dummy pen that looks and 'sounds' the same but doesn't have a needle with an adreanline load). She told me to administer it to my own leg. I didn't want to but with my little girl watching and taking it all in I did it. It was uncomfortable, just the shock of it I think.

Our dieticican recommends the Jext pens because of ease of use for younger patients, they have trainer pens available, and their website is super user friendly (compared to other brands) with child/teenager friendly video tutorials.

What I don't like about this video is that it does not make it clear that the second pen should be administered in the other thigh - not the same leg. This is a vital lifesaving fact that is little known!

So Gracie's reactions to a peanut exposure are immediate and clear to see;

But frustratingly some of Gracie's reactions are not as easy to identify and she has been breathing so in the past I have hesitated administering the pen.

The main reason for this dates back from her toddler days of us carrying an adrenaline pen. For a child between weighing 15-30kg the 150micrograms pen is prescribed. She was always a petite toddler on a low percentile. Definitely under the 15kg minimum weight for a good while and so I was advised only administer the dose if her airway was blocked.

Ref 1 A dosage below 150 micrograms cannot be administered with sufficient accuracy in children weighing less than 15 kg and use is therefore NOT recommended unless during a life-threatening situation and under medical advice.

Now she weighs over 30kg so we carry 2 300micrograms AAI (adrenaline auto injectors). Overdose is no longer a possible issue so I want to list 4 things you need to look for if you feel scared to administer your childs AAI.

Anaphylaxis causes the immune system to release a flood of chemicals that can cause you to go into shock - blood pressure drops suddenly and the airways narrow. Sometimes, however, anaphylaxis can occur a half-hour or in rare cases, anaphylaxis may be delayed for hours. Signs and symptoms include:

In my case this last week Gracie had all four of these (except fainting -she was conscious all the time albeit there were times her eyes were rolling in her head). I rang our gp for advice and she said immediately administer the pen. I feel foolish looking back that I hesitated so much.

It is important to remember that the symptoms you experience may be different from previous reactions you’ve had so its a good idea to keep a book handy to write things in. Under stress its very hard to remember all the important and relevent information.

Ref 2 Anaphylaxis may occur without initial mild signs: ALWAYS use adrenaline autoinjector FIRST in someone with known food allergy who has SUDDEN BREATHING DIFFICULTY (persistent cough, hoarse voice, wheeze) – even if no skin symptoms are present.

I was scared what would happen if I administered an AAI and Gracie didn't really need it. So what happened after I injected her?

Nothing spectacular. The AAI clicked and I held it for just over 10 seconds. I released it and rubbed the site gently. 15 minutes later she was definitely brighter, she didn't look hypoxic, the bluish skin was gone but that was all.

And she regularly reminds me that she has a sore leg.

But we are not scared anymore.